Recent studies estimate that between 30% to 50% of the population does not adhere to their prescribed therapies, and one of the reasons is pharmacophobia. Pharmacophobia is a fear of medication and a negative attitude toward drugs in general. The aim of this study was to determine predictors of pharmacophobia. 700 participants participated in the study, of which 80.9% were female. The age of the participants ranged from 19 to 62 years (M=26.5, SD=7.41). The instrument consisted of several questionnaires measuring attitudes toward drugs, beliefs about medicine, emotional disgust, medication form preference, tendency for alternative medical habits and the likelihood of believing in conspiracy theories. Also, the demographic data was collected. The research was conducted through an online survey. The results showed that out of the total number of participants, 20.3% evaluated themselves as pharmacophobic, and 79.7% as pharmacophilics. Given the goal of the study, the results obtained suggest that one of the predictors of pharmacophobia is the tendency to believe in conspiracy theories, where the higher inclination to believe in conspiracy theories leads to greater pharmacophobia. Furthermore, the preference for solid drug forms and drugs that are intended for usage through the body cavity also contribute to an explanation of pharmacophobia in a way that pharmacophobic persons do not have a preference toward said medication forms. The predictor that contributes the most in the explanation of pharmacophobia is a negative belief in drugs, suggesting that a person with an expressed negative attitude to medication will probably not adhere to prescribed therapies by doctors. 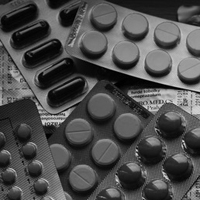